Welcome back to another edition of the Weekend Chronicles, a weekly series that details all the crazy and exciting things that happened over the weekend. This weekend was relatively laid back but enjoyable nonetheless and with all that lies ahead this month I’m happy I had this time to relax. Last week I challenged you all to remember where you came from and I hope you took some time to reflect and reevaluate things if needed. This week I want you to think about the person you want to be a few months from now. I know it doesn’t seem like a lot of time but you will be surprised with what can change in the matter of months. Blast off!

The Autobiography of Malcolm X: As Told to Alex Haley

Friday evening began with a frozen pizza and my computer. My phone had stopped working just a couple of days earlier so my computer was my only source of communicating with the outside world. After catching up on what had happened while I had been phoneless all day I took some time to think about where I wanted to be a few months from now. I chose five components to focus on those being financial, health, intellectual, professional and social. From there I created 1-2 goals for each and wasn’t shy about challenging myself. For example, one of my goals is to read 15 books by June whereas another is to pay off my credit card and start putting more money into my savings. I also spent some time researching and thinking about how I can begin to take Jakub’s Corner and my social media to the next level. With that in mind, I have decided to start with the quality of my photos. I have already invested in a tripod and plan on purchasing a quick-connect lens for my phone within the next week or so. I would also like to purchase a camera but my bank account told me no so that will have to wait for now. In addition, I will also be introducing a new weekly series focused on fitness or health and wellness (I’m still not sure) which coming from me, someone who hasn’t been to the gym in quite some time, should be interesting. The rest of the evening was spent reading The Autobiography of Malcom X: As Told to Alex Haley which I will recap once I am done reading and watching 10 Cloverfield Lane which is about a woman who after getting in a car accident, is held in a shelter with two men who claim the outside world is affected by a widespread chemical attack. Sounds crazy, right? 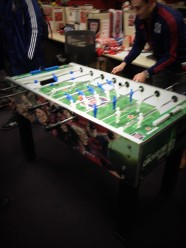 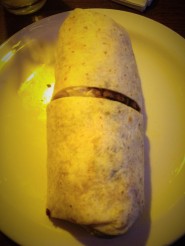 The big highlight from Saturday was working the Chicago Fire game. It was extremely cold and wet but they fed us a pretty solid meal beforehand, we got to hear from one of their executives about how he got started in the industry, I finally got paid and they won their first match of the year. Once the game was over I raced home to meet my family at our favorite local Mexican restaurant, Burrito Jalisco, for dinner. I know that I’ve talked about it before and we continue to go back so they must be doing something right. I decided to switch things up this time around though and ordered the Al Pastor Burrito, which if you are unfamiliar with al pastor it is a simmered pork, and it was absolutely delicious. After wrapping up dinner I planned to head to Lincoln Park to see my friend Ricco Ramos a.k.a. Mixmaster Suave perform at MaxBar and Bamboo Lounge but my night was cut short by traffic. If you are even remotely interested in music take a few minutes to check out his website and sign up to become a VIP member which will keep you in the know for all upcoming events and promotions. Also be sure to follow him on Twitter and Instagram as well as like him on Facebook. You will not regret it!

I woke up early on Sunday morning thinking that I had to volunteer with work at 8 AM in the city but after checking my email I was relieved to find out that I wasn’t scheduled to go in until around noon. Unfortunately, I was unable to fall back asleep so I used that extra time to wrap up any movies I hadn’t finished watching in the past couple of weeks until it was time for breakfast. When that time eventually rolled around it consisted of ham and cheese omelets as well as sausage links which really hit the spot because I had been in the mood for breakfast food all week. With that in mind, I’ve been really wanting to begin cooking more often and have been particularly interested in making a breakfast pizza so whenever that happens I will be sure to post pictures and share the recipe. From noon until 4 PM I handed out flyers at a CTA Station in the Loop which was just as fun as you could imagine but it allows me to travel for free during my year of service so I’m not complaining. After that I headed over to my aunts for my cousin’s birthday where we had everything from burgers, brats and Italian sausages to potato salad and mac and cheese. My favorite part had to be dessert though which consisted of cookies and cream ice cream cake and one of those ginormous cookie cakes. I wish I had taken a picture so I could show you just how good it all was. The rest of the evening was spent day dreaming about getting my phone back Monday after work.

As always thank you so much for stopping by and continuing to follow my journey. I apologize for the lack of pictures this week but I didn’t have my phone so it made things a little difficult. Next week is my birthday so don’t be surprised if things get extra crazy. If you haven’t already be sure to follow me on Twitter and Instagram. Talk to you soon!

I wish I could eat this good everyday! Shout out to the boys for taking care of me last week.
Felt cute, might delete later!
I want all of you, forever, everyday.
Diet starts next Monday!
Here’s to many more delicious meals like this one in 2021!
Shrimp and Grits! I know what my favorite meal was this year, what about you?